BeyondTheNest's Review of Erma Bombeck: At Wit's End at Geva Theatre Center | Kids Out and About Atlanta 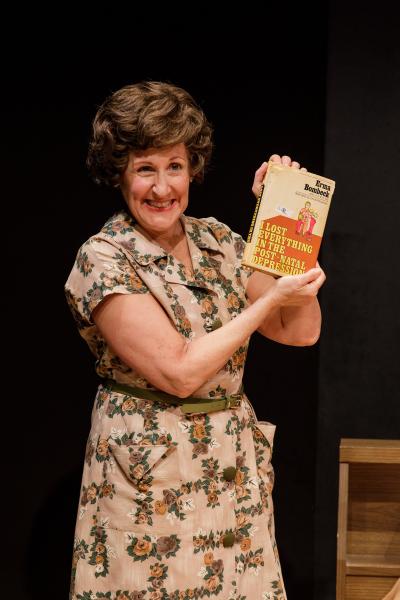 The sparkling humor of the inimitable Erma Bombeck shines once again on the Fielding Stage at Geva Theatre Center! For those who grew up reading the column written by America’s funniest suburban housewife, this is a trip down memory lane as some of her most famous and funniest one-liners ricochet around the theatre, causing ripples of laughter. For those unfamiliar with the fabled columnist's work, this will be a joy-filled introduction.

Erma Bombeck: At Wit’s End, written by Allison and Margaret Engel, and smartly directed by Geva’s Mark Cuddy, shares the story of Bombeck’s rise to popularity as humor columnist and author of more than a dozen books. For many mid-20th Century work-at-home women (a.k.a. housewives), she offered a reality check and breath of fresh air as she irreverently poked good-natured fun at herself, motherhood, and the role of housewife. Although many of her one-line zingers were aimed squarely at her children and husband, she clearly had a deep and abiding love for them.

In this play, perfectly-paced both in content and performance, we join Ms. Sherman on Erma Bombeck’s life journey. What could have been an innocuous opening…sending husband and children off for the first day of carpool duty and school and deflecting an insurance agent’s unsolicited visit…sets us up for the firestorm of laughter we can expect throughout, as well as “the Bombeck perspective” on life, liberty, and the pursuit of evading housework.

We are privy to the peaks in her life (her first job, her marriage to Bill Bombeck and subsequent birth of children, the expanded syndication of her work, and Bombeck’s advocacy for the Equal Rights Amendment) as well as the valleys that are handled with aplomb.  Just as the topic threatens to get too serious (her father’s death, her mother’s failing health, or her own cancer scare) a well-placed quip catapults us to laughter, reflecting Erma Bombeck’s upbeat outlook.

Actor and local syndicated columnist Pam Sherman (of Suburban Outlaw fame) steps into Bombeck’s shoes and imparts her quirky wit with impeccable timing and the same good-humored, matter-of-fact delivery you would have expected from Bombeck herself. 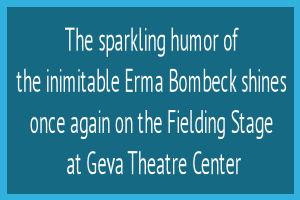 Having left an acting career in Washington, D.C.  to move to “a cornfield in Pittsford” with her husband, where she writes a column about the idiosyncrasies of everyday life, Ms. Sherman clearly relishes the role of Erma Bombeck.  As challenging as it can be to do a one-person show, Ms. Sherman sails through At Wit’s End, giving her character the heart, wisdom, soul, and hilarious sense of humor I imagine Erma Bombeck would have had in real life.

Erma Bombeck: At Wit’s End can be seen on Geva’s Fielding stage through February 25. It has already been extended twice, and tickets are selling fast, so If you want to see this laughfest, get your tickets today!