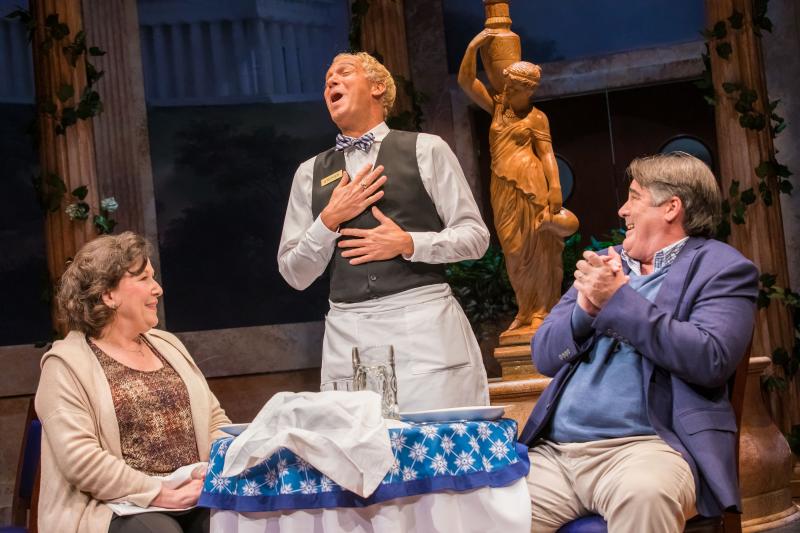 Peter and Irene are celebrating their 28th Anniversary with a first trip to Palm Springs as empty nesters. Having experienced multiple disappointments upon arrival -- a rental car fiasco and a broken hot tub at the hotel -- they settle in for dinner at Dmitri’s Greek restaurant, the only dining establishment open on a Sunday night, besides McDonalds. The couple’s zealous, passive-aggressive waiter is only too happy to prolong the starving and cranky – okay, hangry – couple’s evening and defer their meal, so he doesn’t have to go home to his empty apartment.

Stephen Caffrey portrays the blustering and obstinate Peter with gusto. Used to getting his own way in business and in life, Peter sizzles with indignation to discover their waiter doesn’t treat his request for dinner and a Sam Adams with the same gravitas and expeditious delivery he has come to expect from everyone else.

As Peter’s normally patient and mild-mannered wife, Irene (Toni DiBuono) is initially all smiles and “make-nice” until she is pushed to the edge by hypoglycemia and their overbearing waiter (Danny Vaccaro), who considers the dining room his kingdom to be ruled with an ironclad order pad.

Assistant Literary Director/Dramaturg Francisca Da Silveira writes “It can be said that we are at our most primal when hungry – all civility dies in the empty pit of our stomachs,“ and Slow Food leverages this truism.

Vaccaro carries the lion’s share of the comedic “business” quite artfully, but all three have their moments to shine. It's great fun watching the humor, emotions, and civility – or lack thereof – ebb and flow among these actors.

Director Skip Greer ingeniously capitalizes on both content and comedy, making as rich a use of the space between lines as in the lines themselves, lacing the production with a smorgasbord of sweet, savory and spicy moments.

What makes this play resonate is its universal appeal. We’ve all experienced poor service at restaurants, and in the play’s deeper sense, we've all sometimes experienced struggling with life transitions. As the three characters navigate the topics of the empty nest syndrome, medical scares, loss of partner and pet, aging and feeling unappreciated and less attractive, and dissatisfaction with career choice, they convey as many layers of emotions as Dmitri's frozen Greek spanakopita has sheets of phyllo dough.

Although Slow Food covers some serious topics, make no mistake, this is a joyful comedy. Simply watching the middle aged couple reduced to school child antics just to get beer and a bread basket rivals some of the finest comedic moments in theater or sitcoms.

If you’re looking for a charming amuse-bouche that will fill you with laughter, don’t miss Slow Food.

Slow Food can be seen on the Wilson Stage through February 9. Click here for tickets and more information.